Skip to content
HOME › Musical Notes › Interactive Q&As › I wish to go to the [NAMT] Festival!

For the last few years, our company has had the pleasure of sending representation to the National Alliance for Musical Theatre (NAMT) 29th Annual Festival of New Musicals. This year, Stephanie Graham (Intern Artistic Director), Kevin Wong (Associate Artistic Director), and Robert McQueen (Director of New Musical Development) attended. In this blog entry, Kevin and Stephanie debrief on their experience at the festival!

Kevin: Hey Steph! We’ve been back from NAMT for two weeks now and have had some time to reflect on the experience. It was my second time attending and your first time. What did you know about the Festival before you attended?

Stephanie: I knew that there were eight forty-five minute presentations of new musicals in concert reading format, so I was very much looking forward to experiencing those, not to mention that Prom Queen, which started at the Canadian Music Theatre Project at Sheridan, was in the Festival this year!

As for the Festival, I had heard that it was a busy, exciting (and exhausting) experience, but I wasn’t quite prepared for just how exciting and exhausting that experience can be! [laughs]

Kevin: Not to mention you were already hyped up for Hello, Dolly!:

Kevin: So, I remember being overwhelmed by the sheer number of people in the lineups for the presentations; you could walk in any direction and hit someone from a company you’d always heard of. As a first-timer, what was your initial impression of that space?

Stephanie: A real sense of excitement and anticipation; the energy was almost palpable in the air. And the openness of people – by the time the festival started, I had already met a few people in the registration line from theatre companies all over the US. They were personable, and so happy to talk about their companies and hear about ours.

Kevin: I noticed that too – I found in the year prior that once I broke through my own social shyness and just walked up to people to introduce myself, they were all incredibly receptive. Do you think that’s part of the cultural difference between Canada and the US?

Stephanie: I think the Americans are always ready to talk about what they do, and Canadians might tend to sit back more, but like you, I made a conscious effort to be forward, to talk about our company, what we’re doing, what our goals are. Many of the American companies were really enthusiastic about some of our initiatives, like our Crescendo series.

Kevin: I felt that too – at the Conference, which preceded the Festival, a lot of companies were interested in comparing and sharing learnings from initiatives and projects, such as our discoveries with youth outreach via Make Me A Song, or our experiments with non-traditional theatre space like in Reframed. 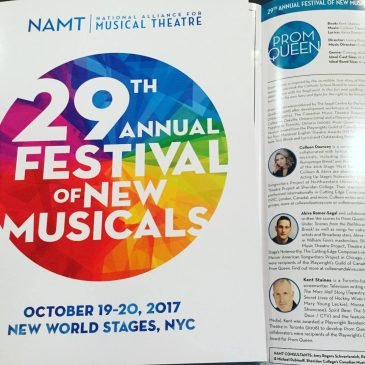 Kevin: And then the festival started. What were your impressions of the presentations in general?

Stephanie: I thought they were really polished, and material was chosen wisely to showcase the pieces.

Kevin: It’s always interesting to see the 45-minute version, because one of the prerequisites for application of a show to the Festival is that the piece must be complete. It then means that upon selection into the Festival, writers have to be really ruthless in choosing how to create the 45-minute presentation cut.

Stephanie: Some pieces chose to do a 45-minute version of their first act, and others did vignette-style highlights from their entire piece.

Kevin: I only caught 3 of the 8 presentations this year, but you were at all 8! Any interesting takeaways from the excerpts you saw?

Stephanie: Of the eight musicals presented, there was such variation in form and style. There were some pieces that felt commercially viable and very polished ranging to some pieces that bucked the rules and played with the ‘traditional musical theatre form’.

Comparatively, musical theatre is a ‘newer’ form for us as Canadians, and feels like our style is still maturing and growing, which could lead to interesting and exciting possibilities as Canadians continue to create. Most of the American pieces selected for presentation in the Festival have already had so much developmental support before they arrive on the NAMT stage.

Kevin: It feels like in Canada, we’re in the midst of a movement right now. As we accept and embrace the potential of musical theatre as a legitimate storytelling form, but also a demanding form with more collaborators and more time required for proper development, we’re creating funding, platforms, resources, etc. Stepping into NAMT, it’s a room full of people in a landscape for whom the validity of the form is a given, and the resources needed to support its creation are so much greater and more entrenched. 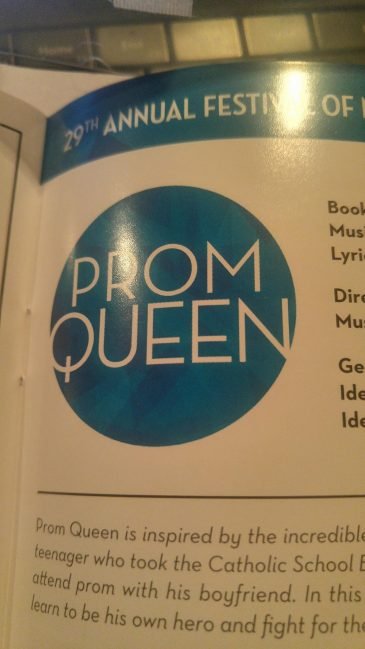 Kevin: And of course, we got to see Prom Queen, written by our own Colleen & Akiva on music and lyrics, with Kent Staines on book!

Stephanie: It was so thrilling to feel such buzz in the room about a Canadian story, written by Canadians.

Kevin: The experience of watching a roomful of Americans respond viscerally to the humour and heart in that Canadian story was once-in-a-lifetime. I can only imagine that’s what it must have been like when David Hein and Irene Sankoff presented Come From Away at NAMT in 2013.

Stephanie: And on top of that, Marc Hall was there in person! It was really cool to see a lot of people, Canadians and Americans alike, connecting with him in person and thanking him for his bravery after the reading.

Kevin: And they had the one and only Chilina Kennedy playing Marc’s mother in the cast too, doing a killer French-Canadian accent and singing the heckdoodle out of the mother’s showstopping ballad. So, all in all, tears for all.

ON COME FROM AWAY: 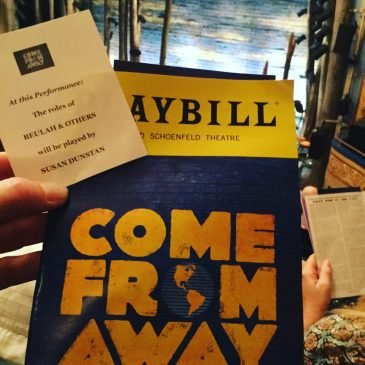 Kevin: Sidebar, you also got to see Come from Away!

Stephanie: I did! I got to see Canadian standby Sue Dunstan go on in Come From Away, and it was an immensely proud moment (We were in the same class at Sheridan College). So wonderful to see the fans crowded at the stage door for a cast that has no “stars”. I had seen the show twice in Toronto, and this was my second time seeing it in NYC.

Kevin: How do you find Broadway audiences respond to the piece compared to the Toronto audiences?

Stephanie: There’s a feeling of some reticence initially before the lights come down, where those who don’t know what it is can be skeptical about coming on board for this Canadian story about such a pivotal American time, but once the show starts, it wins them over, and the kitchen party feel by the end is rocking. And during the curtain call, it’s so fabulous to see so many Newfoundland flags waving in the audience. 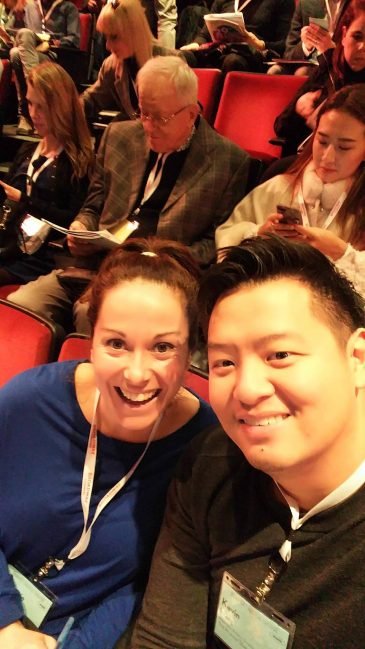 Kevin: Coming out of the festival, do you have any final reflections?

Stephanie: The environment was exhilarating to be in, and it was also so incredibly affirming for Canadian stories and writers to be embraced so wholeheartedly. Both Come From Away and Prom Queen were on the tips of many people’s tongues this festival.

Kevin: I can’t wait to see what lands in NYC at NAMT next year