Hi all! It’s your Associate Artistic Director Kevin here, but wearing my writer hat instead! Joining me for this blog post is the mahhhvelous Julie Tepperman, book writer for our upcoming show, The Preposterous Predicament of Polly Peel, which recently won the Paul O’Sullivan Prize for Musical Theatre and will be at the Toronto Fringe this July! (Ahhhhhhh!!!!!) We just got back from a wonderful week-long retreat where we worked exclusively on act one of Polly Peel at Thousand Islands Playhouse, thanks to the incredible support of The Musical Stage Company and the Playhouse.What is a retreat, you ask? A retreat is where a writer or writing team goes somewhere and is given some combination of accommodation, space, and/or other support in order to fully commit themselves the piece/project at hand, free of distraction. 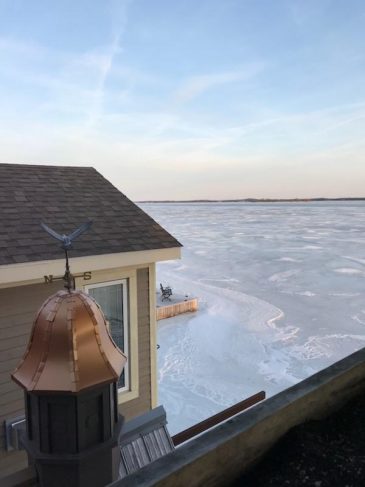 And what a treat it to “reTREAT” for a whole week at Thousand Island Playhouse! See what we did there?

We showed up with a lot of work to do. Polly Peel began as a 20-minute musical idea that was commissioned by The Musical Stage Co. for the Reframed triptych, presented at the Art Gallery of Ontario under the direction and guidance of Robert McQueen. We had always intended for the 20 minute musical to be expanded into a full length book musical, and subsequent to the initial AGO presentation, developed another 20 minutes of it at the InTune Festival in Vancouver (run by the fabulous Touchstone Theatre!). So with 30-40 minutes of existing material, much to create, and much to revise, we got to work! 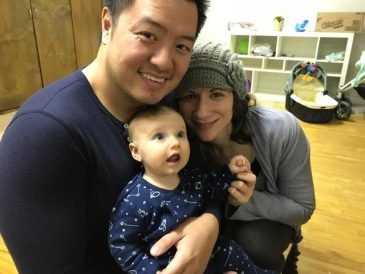 Dramaturge / Director Aaron Willis was on site for support, as was Julie and Aaron’s 3 month old daughter Cassandra, who gave excellent dramaturgical feedback – she cried when she didn’t like something and fell asleep when she was bored. Also, she pooped a lot. We’re trying not to take that too personally.

We worked for 6 days in a row, roughly 12 hours a day (with lots of breaks, sing-a-longs to old musicals we grew up with[i], and a box full of snacks…like, a lot of snacks!) and walked away with a solid and detailed outline for act one, several new songs and scenes, and a huge hit list of stuff yet to write, all colour-coded to indicate various stages of progress. 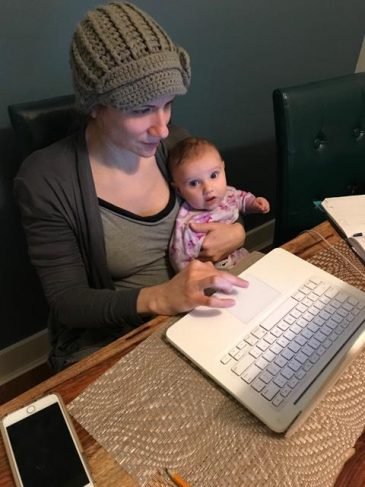 A typical day during the retreat: Kevin and Julie would go through the list of priorities for what each wanted to tackle next. Kevin might go work for an hour in a separate room on the piano to figure out what a new musical idea sounded like and how it could heighten and support the dramatic needs of a scene Julie had conceived earlier. Having completed a first pass at a third of it, he’d run back and play it for Julie who would both comment with questions and encouragement, and then also help brainstorm what narratively was happening for the next two thirds of the scene/song, and Kevin would run away again for another few hours to write the rest of it. All this while Julie (who got used to every shirt she wore being covered in breast milk and spit-up by noon) would also be writing scenes herself and sharing them intermittently for feedback with Kevin and Aaron. Then, all of us would meet back up at the end of the day and share new scenes and songs back and forth. Aaron would pose questions and reflections as well, share design/staging ideas, all the while regularly reminding Julie to feed her daughter, and telling Kevin that he looked pretty and creative and that of course that top mostly definitely did not make Kevin look like a butternut squash left in the sun. Cassandra would often nod sagely…or burp. 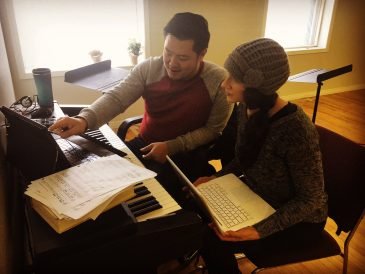 A whole week away to just focus on creation was a huge reminder of how vital retreats are at the right moment in a process, not only for the work and working relationship to grow, but also to provide the necessary mental and emotional space required to really engage with the material, and continue to develop a healthy and meaningful collaboration.

Thank you so so much to The Musical Stage Co. for organizing this and to the incredible staff at Thousand Islands Playhouse who welcomed us warmly into their space and hosted us so generously.

Writing a new musical is beyond daunting! Though there’s a very tall mountain still to climb, we’ve left feeling a lot more secure in our footing, having scaled a bit more of it together.

Next up, we’re about to dive into auditions for our developmental Fringe production, and we’re super excited/scared! We’re sorry/grateful! We’re defying gravity! We’re soaring, tumbling, freewheeling! We’re waving through a window! We’re a salad splashing its dressing! We’re—[WORD LIMIT REACHED]

Aaron – Luck Be A Lady

Kevin – *Mouth too full of cookies to be sure*