It’s that time of year where you’ve gotten out your wigs, donned some makeup and have probably imbibed one two many drinks at a pre-Halloween extravaganza. At Acting Up Stage, where it’s musical theatre 24/7, we are spending the day listening to our favorite spooky cast recordings. Share with us your favorite scary musicals, as we share ours with you! END_OF_DOCUMENT_TOKEN_TO_BE_REPLACED 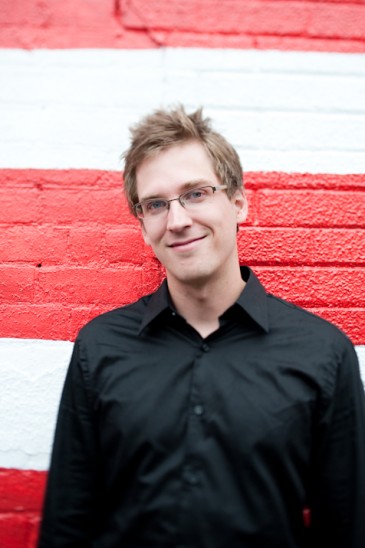 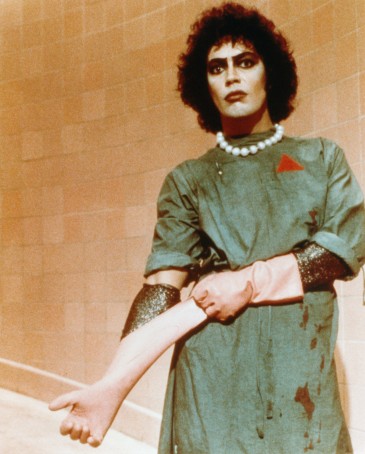 Longest running Broadway musical of all time? The Phantom of the Opera. Highest grossing Off-Broadway production of all time? Little Shop of Horrors. Third highest grossing movie musical of all time? You guessed it – The Rocky Horror Picture Show. So, in the spirit of Halloween, I thought I’d explore the success of the horror musical. Why is it that we, as a musical theatre viewing audience, are so enamoured and entertained by musicals that deal in the supernatural?

Although at seeming first glance the horror and musical theatre genres seem to have very little tying them together, there’s actually quite a bit of commonality when you put down your (pumpkin carving) knife and have a good ole-fashioned ponder. Yes, on the surface musical theatre tends to be all glitz and glitter and horror all blood and gore, but both have an affective mission – a desire to use their aesthetic and style to provoke an audience, and in the process to make us feel something. No wonder, then, that some of the most successful musicals of all time have been those which deal explicitly in thrills and chills.

When you watch a horror movie, as much as you may be viewing it ironically and yelling “Why are you running UP the stairs?,” you also get a genuine thrill from those “gotcha” moments – from the face appearing in the out-of-focus doorway, from the sudden clanging of a clock, from a phone ringing just as the tension is building to its peak. It’s a cleverly constructed system of tension and release, and what better way to engage the audience than to pray on our deep fear of death? Well, how about enhancing our already heightened emotional response with music: the great intensifier. Musical theatre also capitalizes on a schematic tension/release mechanism. Think of a signature “belt” song – for example, “Defying Gravity” from Wicked or “And I am Telling You You’re Not Going” from Dreamgirls – and notice how the tension builds as the melody rises (and modulates) higher and higher. And, just like that eerie calm that is suddenly startled by the busting in of a serial killer, the best belt songs tend to get quieter in their bridge, allowing us to be shocked, and moved, but the very loud re-entrance of the belter on the final chorus.

Have a look at this scene from The Phantom movie. (Alright, it was a miserable failure. But it perfectly encapsulates the ideal marriage of horror and musical.)

Notice how Andrew Lloyd Webber sets up a soothing, nursery-rhyme like melody to lead into the great reveal. Notice how, before we actually see the Phantom, we are surprised by the sudden rise in amplitude and pitch in Christine’s melody. And notice how, once the Phantom is revealed, the full (synthesized) orchestration enters, thereby finalizing a gradual build-up of tension into a great release typical of any horror film. Moreover, Schumacher (the director) smartly calls upon the tropes of horror flicks: the gradual darkening of the room, the eerie tension as Christine begins to sense she’s not alone and, finally, the positioning of Christine’s reflection at the camera’ focal point so that when the Phantom appears (out of focus) we’re surprised, shocked and, ultimately, more emotionally engaged.

In short, musical theatre aims to rile us emotionally through music. The horror movies’ goals are similar: they are both mediums dedicated to the art of feeling. So, it’s no wonder that when paired together, huge success arise from masses of people yearning to be emotionally aroused, to be built-up and released, to be consistently held in the bloody grip of a rhythmic hand.

And so, on the All Hallow’s Eve, why not grab a bowl of popcorn and put on your favorite horror musical. Unless you’re too chicken…? 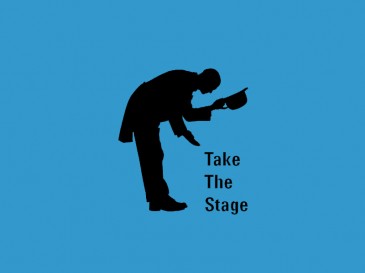 I have mixed feelings about fundraising. Like most of our arts organization colleagues, we are a registered charity, and our business model (which includes heavily subsidized tickets, education and outreach programs, and new work development activities) relies on a 50/50 split between earned revenue and fundraising. In our case, this means that we have a fundraising requirement of over $350,000 per year in order to balance the books. As you can imagine, this can be a very time consuming and occasionally discouraging part of my job. But once in a while, a fundraising opportunity can turn into a much more meaningful occurrence.

Over the last few months, I knew that we needed to inaugurate a new fundraising event, but I was struggling to determine what it would be. Most fundraising events require a high ticket price which inevitably means soliciting the same folks who are already supporting us through their donations. This didn’t feel right to me – we are already so grateful for the support of our donors and I didn’t want to ‘push our luck’ by soliciting them for another high priced event. Couldn’t there be a way to raise money for Acting Up Stage amongst a group who have more limited abilities to donate? Was there a way to raise money through an activity that was more accessible than most high priced fundraising dinners?

As we started to look around, we were really inspired by the athletic fundraising events – activities like Run For The Cure and CN Tower Climb for WWF. At these events, Torontonians come together for a community activity, and – in order to participate – set a personal pledge goal and raise funds for the charity through friends and family who make donations. Upon further examination, there didn’t seem to be a similar event for singers or dancers. And so, Take The Stage was born.

The inaugural Take The Stage took place on October 6. Four teams came together to raise money for Acting Up Stage Company and participate in a musical theatre competition. Each team consisted of a group of amateur performers who perform together on a regular basis. We had two community theatre groups (Scarborough Music Theatre and Etobicoke Musical Productions), a youth theatre company (Bravo Academy) and a team of choristers (singers from the mnJCC choirs). When each group arrived, they were assigned a musical director and a “star trainer” (Louise Pitre, Jeff Madden, Lisa Horner and Sharron Matthews), and a song from the contemporary musical theatre.

And off they went! Each team had three hours to learn a brand new song with complicated harmonies and light movement. Needless to say, the Winchester Street Theatre (where we held the event) was buzzing with musical theatre madness as each team worked with their trainer and musical director to master the music, find the narrative in the story and put the song on its feet. Jeff Madden utilized his Jersey Boys expertise teaching Bravo Academy “Walk Like A Man”. Lisa Horner – who was in previews for Les Miserables – tackled “One Day More” with the mnJCC singers. Sharron Matthews tapped into her Legally Blonde to teach Etobicoke Musical Productions “So Much Better”. And Louise Pitre rocked out “Defying Gravity” from Wicked with Scarborough Music Theatre.

The event culminated in a showcase with each team performing their song. After much deliberation, our panel of judges awarded Etobicoke Musical Productions with the inaugural Spotlight Award for Excellence.

Beyond being a heck of a lot of fun, this was a remarkable afternoon for our organization.

First off, we raised over $8500. In order to participate, each team had to raise a minimum of $2000. This money was generally raised through small donations of $10-50 from friends and family of the participants. In was a beautiful confirmation that fundraising can occur from a broad range of sources and that, through distributed fundraising, we can expand the network of people supporting Acting Up Stage Company beyond those in our immediate inner circle.

Secondly, we were so delighted to build stronger relationships with these four amateur performing arts groups through the competition. As a company that fiercely believes in the art of musical theatre, surrounding ourselves with other passionate musical theatre fans is hugely important. While participation in our shows is restricted to professional performers who are members of Canadian Actors’ Equity Association, Take The Stage offered a terrific way to work with a group of amateur performers and to bridge the worlds of professional and amateur artists through this intensive training and performance day.

We are so proud of our new signature fundraising event and look forward to the second annual Take The Stage in 2014. 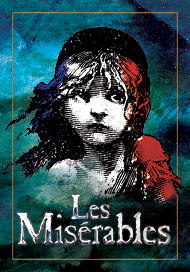 Our Elegies Stage Manager, Lisa Humber, calls the backstage shots in this new production of the critically acclaimed Les Mis. Based on Victor Hugo’s classic novel, Les Misérables is an epic and uplifting story about the survival of the human spirit. The magnificent score includes the classic songs “I Dreamed a Dream,” “On My Own,” “Stars,” “Bring Him Home,” “Do You Hear the People Sing?,” “One Day More,” “Empty Chairs at Empty Tables,” “Master of the House” and many more. 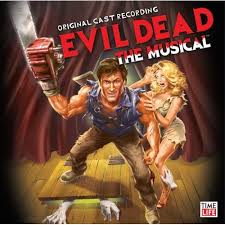 Just in time for Halloween. The only musical in the world with a “splatter zone”! Five college students go to an abandoned cabin in the woods, and accidentally unleash an evil force that turns them all into demons. It’s all up to Ash (a housewares employee, turned demon-killing hero), and his trusty chainsaw to save the day. Blood flies. Limbs are dismembered. Demons are telling bad jokes… and all to music.

Now on stage until December 22 – The Randolph Theatre (formerly The Bathurst Street Theatre), Toronto – evildeadthemusical.com or 1-855-985-5000 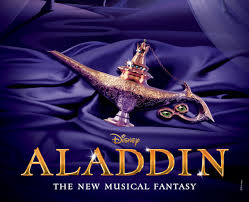 Be one of the first to experience the magic of Disney in this brand new world premiere. Our Intern Producer, Thomas Swayne, has been helping mount the production. In an exotic, faraway land, one man’s life is about to change with the lucky rub of an ancient lamp—and you’re invited to join the magic carpet ride.