There’s only room for one pair of ruby slippers in this town, Toto, and though Mirvish may be still be figuring out Danielle’s shoe size, Scarborough Music Theatre is proud to present a run of The Wizard of Oz which reinterprets Oz like nothing you’ve ever seen before. Naturally, we had to send them on an MT Scavenger Hunt!
END_OF_DOCUMENT_TOKEN_TO_BE_REPLACED

One of the funny things about redefining the traditional family, is that even though people are now very open minded to families of all sorts, they are no more open minded about gender-identity colours. Every gift we have received comes in the same colours – blue for our son, pink for our daughter. Outfits, teddy bear outfits, blankets, towels, bibs, etc. Don’t get me wrong, I like blue and pink, but everyone needs a little variety in their wardrobe, don’t you think?

Even more surprising is the reaction of people when we deviate from this colour-scheme. When our daughter is styling baby blue, people stop us and say:

It’s as if we put her in white after Labour Day.

END_OF_DOCUMENT_TOKEN_TO_BE_REPLACED

On Thursday, a familiar orphan will officially arrive, bags and dog in tow, to the corner of 47th Street. She will be less exaggerated than we remember her to be, and her world will apparently no longer smell of drying comic book ink. She will enchant audiences who remember her fondly and those who are about to meet her for the first time, as she overcomes adversity to find home among the rich and influential of Franklin D. Roosevelt’s NYC. Of course, as I type those last three magic letters, my mind continues with “what is it about you?” proving just how indelible Annie has become, even if (like me) you can’t stand the show.

Director James Lapine has pulled a Gypsy with this production, stripping it of its stylized glitz and comic veneer so that it rings truer to the time in which it is set. The LA times released a feature preview about the new tone of the show, arguably meant to entice adults (like myself) who think of yapping children, annoying “power ballads” and quintessential Americana whenever someone busts out “Just think of daaay, that’s greeey and lonely.” END_OF_DOCUMENT_TOKEN_TO_BE_REPLACED 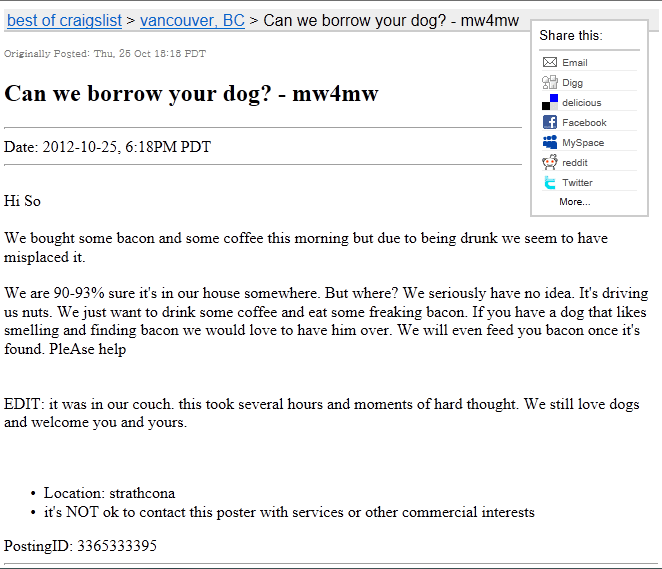 Do You Want What I Have Got? A Craigslist Cantata runs from Jan 30 – Mar 3, 2013 at the Factory Studio Theatre. Tickets are now on sale, or visit our website for more info.

Thom Allison, last seen as Coalhouse Walker Jr. in the Shaw Festival’s smash hit Ragtime, is an international performer who has appeared in the original Canadian companies of Miss Saigon, The Who’s Tommy and Rent. He is a regular company member at Shaw and Stratford, and has been nominated for a host of awards including two Dora Nominations. Thom is currently appearing as a judge on CBC’s Over the Rainbow

What musical will you always remember for its choreography/dancing?

I was so gobsmacked by Tommy Tune’s choreography (and direction) in Grand Hotel I had to go and see the show twice. It was so smart and creative and athletic and chic while not being gimmicky. I was blown away. END_OF_DOCUMENT_TOKEN_TO_BE_REPLACED